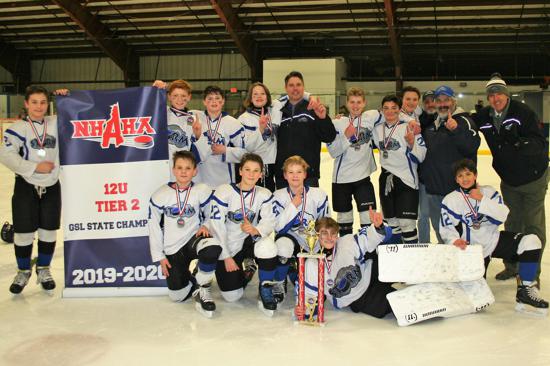 PW1 NH Tier 2: After driving through the winners bracket with 9-0 and 5-1 wins over #4 Concord and #2 Dover, the #1 seeded PeeWee1 team faced Concord again who had advanced through the losers bracket.  A well-coached Concord team came out with a well-executed game plan and took a 1-0 lead in the first on a broken play that resulted in a wrap-around goal on Aiden "The Snowman" Snow.  The Storm tied the game in the second on a beautiful rush by defenseman Cavan Benjamin who fed Ryder Wilson to the right of the Concord goaltender.  Wilson slid a quick backhander 5-hole to even the score.  It was a chess-match as the high-powered Storm offense continued to press and forwards Logan Caffrey, Ben Clary, Nick Daniels, Keegan Dannehy, JoJo Drent, Ian Surgenor, Ryder Wilson pumped 14 shots on goal trying to break the tie.  An outstanding effort by defenseman Aiden Bean, Cavan Benjamin, Gavin Miller & Braelyn Park held Concord to zero shots in the third period, but regulation ended in a 1-1 tie.

It took 3 overtimes of nail-biting hockey as both teams traded chances and both goaltenders stood up to the challenge before Cavan Benjamin kept a puck in on the right side and battled below the goal line before finding Nick "Tricky Nicky" Daniels in the high slot all alone.  Daniels buried a quick wrister with a minute to play in the 3rd OT, high blocker side sending the Storm Bench and ice into chaos with sticks, gloves and helmets flying.

It was an amazing effort from an amazing group of boys(and girl).  Every player contributed both on and off the scoresheet.  The Storm PW1 team will head to Warwick, RI for Regionals to take on the top Tier 2 teams in New England on March 13th-15th.